For example, the advertised throw ratio on Epson’s EB-W42 projector is "1.3 – 1.56:1", if we require an image 2 metres wide then the calculation is as follows;

So we now know that for a 2m wide picture we would need to place this projector between 2.6 and 3.12 metres back. Checking the throw distance of a projector is particularly important if you have a set installation point where your new projector must be placed.

In the event you have a particular distance in mind and wish to know the image width you'll get, you simply need to divide the distance by the throw ratio figure. For example, if you want to place this same projector 3 metres back the calculation is as follows;

So at a 3m distance we now know you will be able to zoom the image width between 1.92 and 2.3metres.

Throw ratio is always based on image width, not diagonal or height.

What is a Short throw Projector?

Most projectors, like the Epson in the above example, need to be placed a few metres back for an average image size. Sometimes this longer distance is not possible, and we need a projector capable of projecting a large picture from a closer distance. A short throw projector is a projector with a lens that creates a large picture from a shorter distance. For example, With Optoma’s EH412ST Short Throw projector, it has an advertised throw ratio of 0.5:1, so for a 2m wide picture we would need to place the projector exactly 1 metre back (0.5 x 2m = 1m).

Note, this projector (like most short throw projectors), only has 1 throw ratio figure as there is no zoom so you need to be precise with positioning.

What is an Ultra Short Throw Projector (UST)?

An Ultra Short Throw projector is a projector with a very short installation distance. Generally, a UST projector will be a larger unit that uses a mirror to create an image from closer range. These models are usually installed on a wall mount and project straight down onto the same wall. Many UST models only sit about 30cm out from a wall for an image around 2m wide. 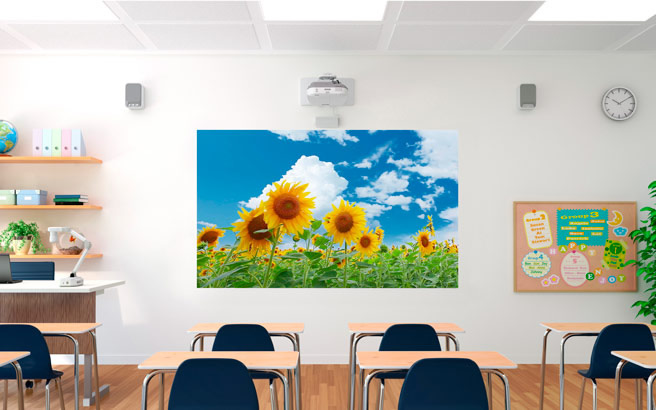 All major projector brands use the ‘ANSI’ (American National Standards Institute) Lumens standard to measure brightness. The measurement is taken at the screen by the manufacturer prior to release. Using a short throw projector does not necessarily mean it will be brighter. If a very bright picture is required, and you have the ability to place the projector further back, you may be able to get a brighter long throw projector at a similar price.

Advantages of a Short Throw Projector.

Downsides of a short throw projector.

Most short throw projectors feature no zoom. When setting up or installing your projector you need to be careful to install the unit at the right distance…. Being off by a few centimetres can affect your image.

Focus uniformity is usually not quite as good on a short throw projector. This means you sometimes may notice the corner of an image not being as sharp as the middle or opposite corner. This is generally not noticeable while watching a film but can be seen when displaying text.

Short Throw projectors require a very flat surface to project on to, this is particularly true when using an Ultra Short Throw projector. Screens that roll or fold are not recommended as the image can appear wavy. Best to stick with a good quality fixed frame screen or projection whiteboard.

Should I pick a Short Throw or Long Throw Projector?

Short throw projectors are a great option if you can’t install a projector further back, possibly to avoid a ceiling fan, light fitting, or air vent. They are perfect for small rooms and are becoming increasingly popular for flight and golf simulators.